So we’re back! Finally I have settled into life down here in Florida, my child is in daycare and has started going back to bed before 8pm. Getting a toddler adjusted to a new place is NOT easy and her father and I have been more than exhausted trying to keep up with her. Enter daycare where she is around children her age and all that energy she has can be utilized! And with being childless during the days, what does that leave me to do? Relax on the beaches of the Treasure Coast? Take naps whenever I want to? Explore this new area that I have found myself a resident of? HA! It gives me more time to pour into Interpreting Slave Life and to prepare for conferences, presentations, and make myself available to meet with historic sites on helping them tell the story of slavery. So if you’re an historic site needing help….CONTACT ME!!! I am here for you. For a fee. (hey a girl’s gotta eat! 🙂 )

Back to the matter at hand…and the interesting title I have for this blog. O.M.Gourd!!!

Working in the slave garden at Brattonsville, I really wanted it to reflect what the slaves would have had.  I was in the process of making the cabin really look like something the slaves would have lived in. We had a bed, and the walls were whitewashed and that was fine, but there were too many other things in the cabin that had collected over the years. While I was not looking to make the cabin bare bones, I wanted more objects that could have been made by the slaves. Then came to mind the use of gourds, and how they were not only dippers, but storage containers, bowls, carriers of water, etc. I looked around the site and at first thought, “Oh, we need to buy some” then realized I have dirt and all I needed was seeds and said, “no, we just need to grow them!” How hard could that be right?

We ordered seeds and in April, got to planting. I planted 7 seeds for ornamental gourds (an assortment), hoping that I would get something I could use. It started looking grim when only one seed germinated. But from that one seed..oh boy! I never thought so much could come from one plant. Pretty soon we had three blooms, then 12, then 6 gourds were growing. Things slowed down as far as fruit production but the vine took over the garden.  It was gourds gone wild! 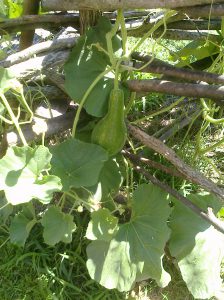 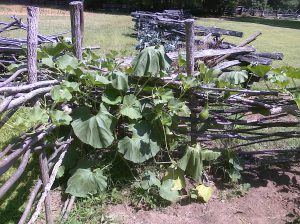 After doing some trimming back, we started to see that there would be at least 6 very large gourds that could be used for storing water and if the bases grew large enough, perhaps being turned into bowls. Only thing was, I wasn’t really sure what to do with gourds once they grew. How would I know they were ready? And when they were ready, what next? Fortunately, I was able to find a resource through the Clemson Extension on how to harvest and care for these lovely gourds. I harvested two in Mid-August and set them out to the task of drying. After 2 months, it seems as if these gourds are ready to go.  I’m thinking of taking one and making it into a bowl and then using the other as a water container. The third, not quite sure what I should do with it. 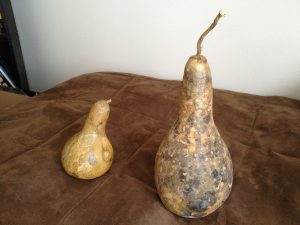 The uses got me to thinking about those slaves who grew these gourds to create dippers, and storage containers and how they didn’t care what the inside looked like as long as it held water. My 21st century mind is automatically telling me, I’m not going to actually EAT out of this thing, especially after using gourds at Brattonsville to water gardens and to ladle hot water into pottery to clean it. The inside gets a little soft, and pieces of gourd can get loose and float around in my water…yuck! But that’s my 21st century mind. Slaves would be thankful just to have something they can use, something that wasn’t handed down from the plantation masters.  Something they can call their very own. Eating out of a bowl made with a gourd beats eating out of my hands. Gourds would also play a part in slavery when it came to freedom. Follow the Drinking Gourd anyone? But more about that in coming weeks.

What I found fascinating about the gourds in their growth is that you could possibly provide a whole community with these containers with very few plants. After all, I managed to get over 20 blooms with about 75% of them turning into gourds from ONE plant. Was this something that was done on plantations? Not if you go on the generalized picture of slavery that we get from the narratives. As someone who studies slavery, it was important that first and foremost I accepted the fact that it is what it is. I cannot go back and change that. The brutality, the selling, the labor, the whole system…it happened. But then I look at ways where, okay, if this had to happen, how could they have made it better? Other than NOT OWNING ANOTHER PERSON..you start to think, could conditions overall been better? How? Little things like providing slaves adequate bedding, better food, better clothing and perhaps something like a gourd to carry water and food in. But once again, that’s my 21st century mind trying to understand how a system so cruel could go on for so long. When I think about it too long, the only thing I can do is shake my head, thank God that it’s been abolished, and now say, Oh My Gourd.